Stephanie Williams began her comics career as a historian and podcaster, which eventually led her to writing pop culture critique and then, of course, comics.

Williams is the creator of the webcomics Parenthood Activate (with art by Sarah A. Macklin) and But What If Though, as well as the fan comic Living Heroes (with art by ONeill Jones and colors by Christina Poag), which reimagines Black Marvel heroes (and Jennifer Walters) as characters in the ‘90s sitcom Living Single (One of CFC’s Best of 2020). She also contributed a short comic starring Monica Rambeau, with art by Natacha Bustos and colors by Rachelle Rosenberg, to Marvel’s Voices: Legacy (2021) #1, which was released in February.

For Women’s History Month at Comfort Food Comics, we chatted with Williams via e-mail about her work as a comics creator and critic, as well as the creators who inspire her, her favorite tropes and her future goals. 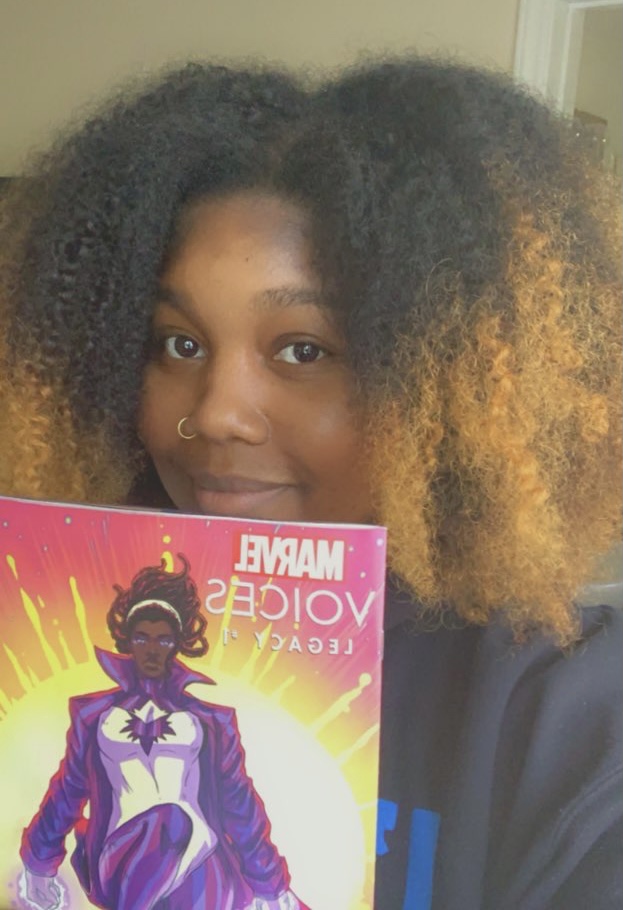 Samantha Puc: What started you on the path to becoming a comics creator?

Stephanie Williams: I was working as an electron microscopist in an extremely toxic lab. I wish I could just blame that on some of the chemicals we used, but that, unfortunately, wasn’t the case. I was miserable. My need to do something that took me away and gave me some peace and joy grew increasingly.

Eventually, I got into podcasting, talking about the comics, shows, and movies I was enjoying or not. Soon after launching my own podcast, I started another one with a co-host, called Misty Knight’s Uninformed Afro. We did deep-dive research on the comics history of various Black superheroines. When that podcast abruptly ended, I had all this comic research I had done in prep for the next season, and I didn’t want it to go waste. So, I figured if I could talk about comics, then I can indeed write about them. I pitched to SYFY FANGRRLS, and the rest is history.

I eventually quit my job at the lab and started freelance writing full-time. The job nearly broke me, and leaving it was the best thing I could have ever done. Once I started getting comfortable with my writing voice again, the desire to write comics came naturally. I have such a great love for comics. I just love it as a storytelling medium, and I love how tied to history comics can be. After a failed Kickstarter project for a graphic novel I co-wrote, I decided I couldn’t wait for someone to give me an opportunity, so I made one for myself the best way I could. That’s where Parenthood Activate came about, and eventually But What If Though, and from there, the Living Heroes fan comic. Next thing I know, I’m writing a short story in an anthology for Marvel and getting more opportunities after that.

Williams: Teamwork makes the dream work. Comics are such a team effort. I’ve had an excellent opportunity to work with several various artists with my webcomic But What If Though. It’s been such a learning experience itself, but one that has definitely helped me.

Williams: Now that I’m creating more and getting into that process, it’s changing how I critique things. It’s not that I’m more forgiving or harsher on what I’m critiquing, but I feel now I’m actually making sure whatever I’m reading or watching, I’m doing so with the intent of receiving it for what it is instead of what I want it to be.

Puc: What do you aim to accomplish as a comics creator?

Williams: I want to do it all. I want to write for some of my favorite characters. I want to create more of my own. I want to reach a point where I can help others bring their stories to life. Lack of resources hinders so much of our lives. If I can do anything to share or provide resources so someone can tell that story they’ve always wanted to tell, then I want to be able to do that. When it’s all said and done for me as a comics creator, I hope that my work inspired someone enough to make something they love.

Puc: What do you hope your readers take away from your work?

Williams: Joy. I put my all into what I do, and I enjoy the process of it all. I hope that comes through.

Puc: What draws you to a story or character?

Williams: As a reader, I love mess, and I love characters who can’t stay away from it. I love a character with whom I can go on a journey emotionally.

Puc: What are your favorite tropes?

Williams: If we’re talking romance, then the marriage of convenience and enemies to friends to lovers. I love a reluctant hero. Size means power, because I love a story with an underdog.

Puc: Is it vastly different writing for a traditional comics publisher versus writing a webcomic? Do you prefer one over the other?

Williams: No, not really, because so far, I’ve written exactly what I would have on my own. If my voice and vision were ever hindered in some way, I would definitely feel differently. Hopefully, that doesn’t happen anytime soon, but I know what I can do the moment it does, and that’s my own thing.

Puc: Since this is Women’s History Month, are there any women in comics you want to shout out?

Williams: ABSOLUTELY! Sarah Macklin, ONeillJones, Christina Poag, Taylor Goethe, Regine Sawyer, Jamila Rowser, and Sara Century. I could keep going, but I’d still be typing. They have all been folks I’ve either been fortunate enough to work with or support by talking about their fantastic work!

Puc: Is there anyone who inspires you or whose work has pushed you to change how you approach your own?

Williams: Yes! The women I just mentioned. I also love Danny Lore and Vita Ayala; they are phenomenal writers on their own and even better when they team up. There are also romance writers whose work I read and get inspired by all over again: Altonya Washington, Alyssa Cole, Maureen Smith, Rebekah Weatherspoon, Brenda Jackson, and Farrah Rochon. Then there’s the late Dwayne McDuffie who, no matter how many times I read something he has written or watch something he wrote, I’m just in awe.

Puc: What have you been reading lately?

Williams: I just recently read L.L. McKinney and Robyn Smith’s Nubia: Real One and loved it. I’m so happy Nubia is finally getting some just due.

Puc: Have you had any “quarantine go-to’s,” like a TV show or movie?

Puc: If you can say, what are you working on now?

Williams: I can’t. I wish I could, and maybe you all will know about it by the time this comes out, but for now, I can’t say, and I feel like I could explode from the happiness I have because of it.

Puc: Is there anything else you’d like to add?

Williams: I hope that whoever is reading this finds comfort in knowing that there is no one way to get where you want to go. I know that sounds so after-school specialish, but I mean it. I’ve lived it. I’m still living it. I hope they find the courage to open up that notebook, laptop, or whatever and write the first couple of sentences for that idea they’ve had.

To keep up with Stephanie Williams, follow her on Twitter at @steph_i_will. You can see more of her work at whysteph.com