Sub-Mariner is without a doubt, one of Marvel’s most niche characters. Namor doesn’t exactly get the same kind of recognition that say, The Vision or Jubilee gets, but he has a very dedicated fanbase. He is, however, incredibly integral to superhero comics as a whole.  When I was just starting to seriously get into comics as a medium, practically any comic I could get my hands on I was absolutely devouring. Lucky for me, my middle school library (where I would spend an entire period in being the library assistant) had the holy grail for someone like me, Marvel Comics Essentials, which were perfect introductions to characters I normally would never have heard of. In Daredevil Essential: Vol. 1 issue 7, Daredevil encountered someone I had never really heard of until that point, Prince Namor of Atlantis. I was immediately interested in the character. So when I heard about a little book called Sub-Mariner: The Depths you know the hunt for that book was on. Little did I know, I would find that book in high school, and that it would change my views on Superhero comics forever.

It may sound crazy, but I’m really thankful that I read Sub-Mariner: The Depths years after first wanting to. If you love movies like Alien or The Thing, this book is for you, if you love Lovecraftian stories, this book is for you, if you think Robert Egger’s film ‘The Lighthouse’ is a masterpiece, you guessed it, this book is for you. Middle school me? I thought comics were boring if something didn’t explode or some poor soul didn’t get a building dropped on them every 2 pages. The Depths is a quiet, sinking tale of the search for Namor, it is very much not 2012’s The Avengers. It quite honestly feels like an indie book you’d see from Image or even a short B.P.R.D. story from Mignola and Darkhorse, and it’s a perfect example of showing us as readers, just what superhero comics can (and probably should) be. Peter Milligan took a big risk making a Namor book and not making Namor himself the main character, but it pays off so well. Esad Ribic is a master at art, and frankly establishes the tone of the book with just the main cover, which can be difficult to say the least. 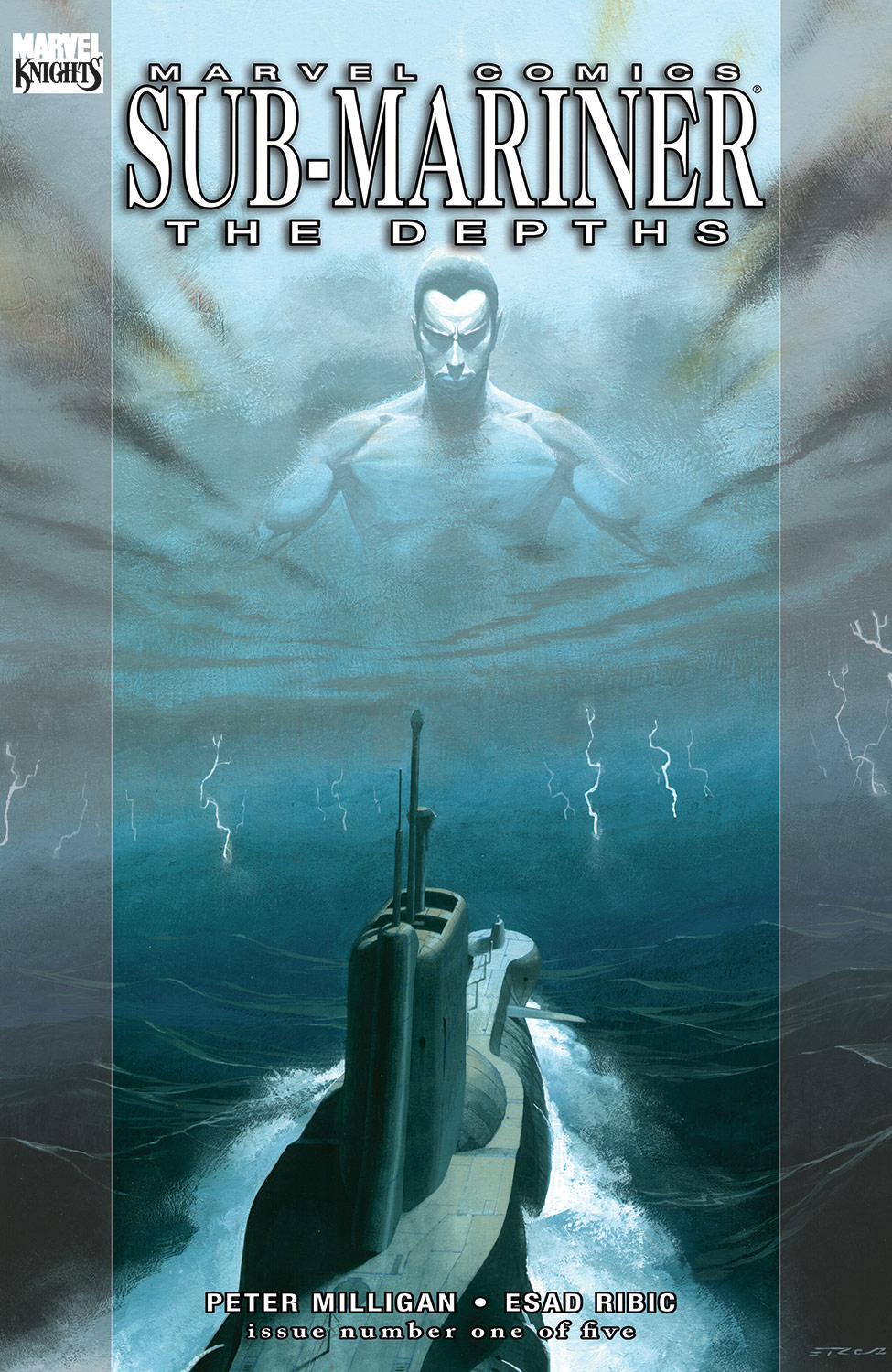 Around the time I finally read The Depths, I was looking for something more from comics as a whole. I had just read Hellboy: The Wild Hunt, and had started Scott Snyder’s The Wytches. I wasn’t really reading superhero comics, I was 17, in my senior year of high school, and I was dead set on becoming a film director. It was 2019, and I hadn’t thought about this white whale of mine (being the very book I’m talking about now) in a few years. I thought I was getting into something like Aquaman: The Trench from DC’s New 52 line.  I was ready to take that plunge into The Depths, and much like the protagonist, Doctor Stein, I didn’t expect to find anything. What I found was so much more than just the stunning art from Ribic.

I went into this book with expectations and, with other friends I’ve talked to about this book, so did many others. Instead of the majestic prince of Atlantis we get a frightening sea monster of a man.

Gone is the bright green speedo, replaced by some well placed shadows. Gone is the face for a statue outside of the pantheon, replaced by a face that resembles more shark than man. Gone are the bright vibrant colours of mainstream cape comics, replaced by a more dull and cool tone of watercolours. Going into this book with expectations of what a cape comic is, will leave you disappointed. Sometimes, however, you don’t actually know what you want and sometimes the writers, artists, and letterers do actually know. 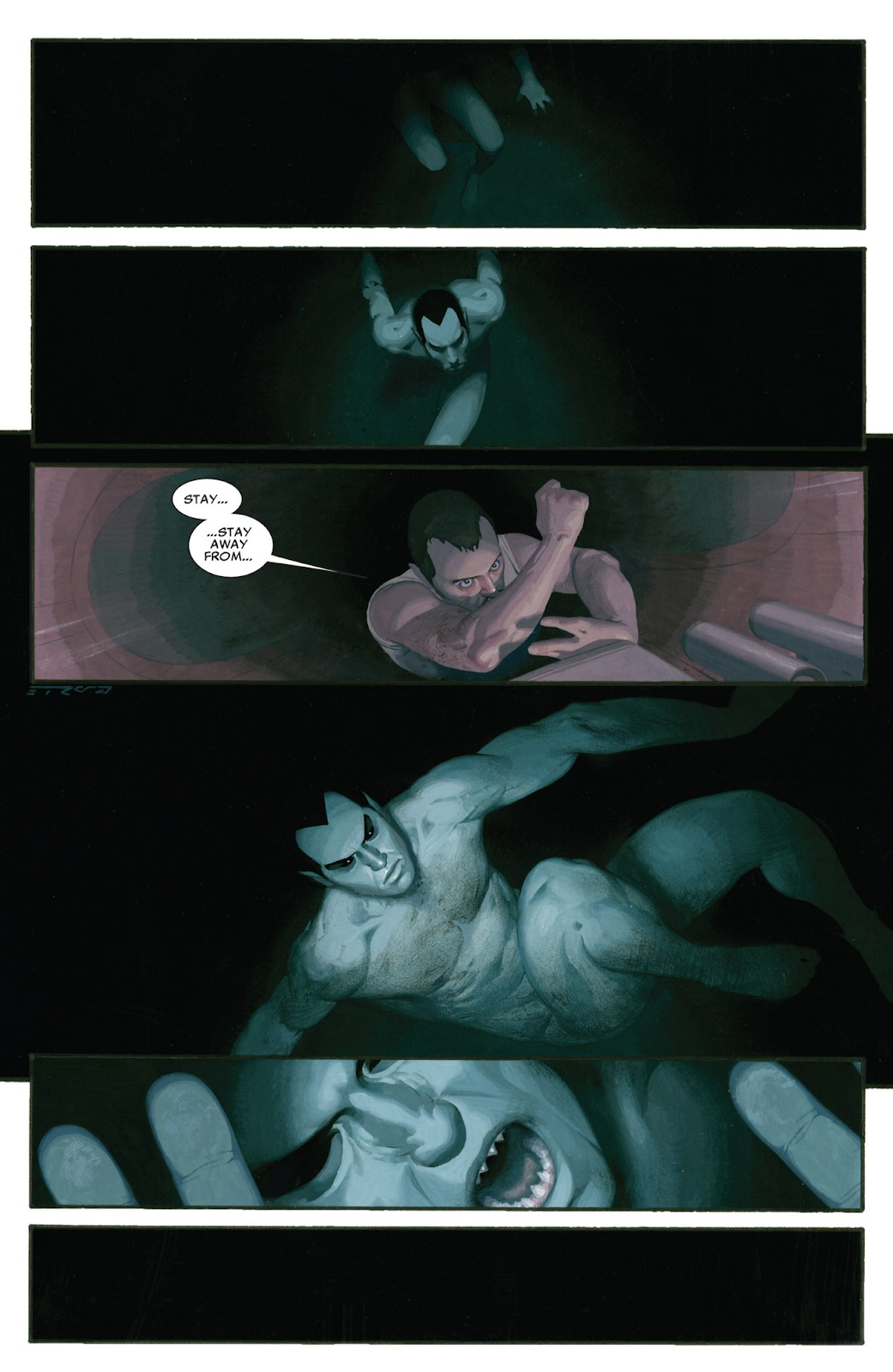 The lettering done by VC’s Cory Petit is honestly incredible. It gives us a real Jules Verne feel to the story, but feels like a Lovecraft short story, something about it is just very familiar but also new and fresh to see in a cape comic. Each aspect about this book just highlights and compliments the other parts, it’s like having an expensive dish at a fancy restaurant.

The Depths is ultimately about how going into life with certain expectations can set you up ultimately for failure, something I needed to hear at 17. Maybe I’m reading too much into this book and maybe none of it was meant that way, but that’s what it did for me. It’s why I keep grabbing the collected edition off my shelf just to read through real quick. The combined efforts of Esad Ribic and Peter Milligan taught me a lesson that continues to drive how I live (or at least I hope I live), which is an impressive feat for a 5 issue mini series based off of Namor: The Sub-mariner!